Right now I’m living in my van half time (I still spend the weekends sleeping at home, while working on Rusty). It’s interesting; and I think in the long run it will be a good change. But how did it all start?

30th of July – A random thought

It all started sometime in July, when I found out I couldn’t keep living alone in the student dorms. Welp. (this turned out to be false, as my roommate didn’t spend a single night in our room, as he’s going to go for a PhD in Texas).

So I started thinking about renting a place; but it seemed exceedingly expensive, and, moreover, pointless, as I don’t intend on spending the rest of my life in Timisoara, and my parents already have a house in Lugoj.

So I came up with a brilliant solution, if I say so myself: I’m gonna sleep in my office, and if I’m not allowed to do that, I’ll just sleep in Bessie (my ’91 Mercedes W124).

Bessie seems spacious enough. We have showers, a fridge and a microwave at our office, so I had most essentials laid down. All I needed was a place to sleep.

3rd of August – a long dusk

My hypothesis of sleeping in Bessie had to be tested, so on the 3rd of august I took a flexible mattress I had lying around, 2 pillows, and a blanket, rolled down the left side chair of my car, and tucked in for the night.

I should say that at this point, my mother was still very much against the idea; but what can you do, when you feel a calling, you have to follow it.

It was hard falling asleep. Something akin to when I first slept alone in a tent. All those noises on the street outside. People passing by. And the position wasn’t all that comfortable, as the mattress was too long to fit in Bessie.

“When I went to sleep in Bessie I felt very … shaken / scared / worried. My heart was beating rapidly, and I could not calm it down. Eventually I fell asleep, and woke up covered in sweat. Then I felt okish-er and went to sleep again. I woke up a couple of time” – 4th August journal entry

Clearly, not my best night. This make me consider an alternative, that I’ve never taken into account before: living in a van, or as people call it, VanLife :D. I have a friend in the states who traveled around in a smaller van. Maybe she was the inspiration? Maybe I saw people online and forgot about it? I don’t know, but the thought appeared, the box was opened, and I think it would take me years to close it if I wanted to.

Pictures like the one above captured my imagination. At some point in August I also asked and was told, no, I can’t sleep in my office building; go figure.

And, it started being about more than just a nice thing; it was a chance for me to start and see through to the end a big personal project.

My work mates weren’t in favor of the idea, together with my mom and some of her friends. My other friends were for it, whilst my dad said he would’ve also done it in his 20s.

This dream, and the road I’m walking on also made me realize how hard it is to find people with similar enough ideas, personalities and life goals. And for some reason, I often catch myself thinking that most such people are a tad bit older than me. And it can be so tempting to stop, or take a road you don’t really like just to avoid loneliness.

And so, with doubt and wonder and anxiety and hope, my journey had properly begun.

After a lot of scouting, and worries, and a mechanic visit, I bought her, my beautiful Rusty. A Ford Transit from 2008, with a 2.4L 138 HP Diesel engine. 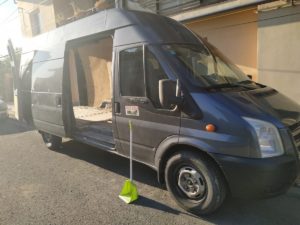 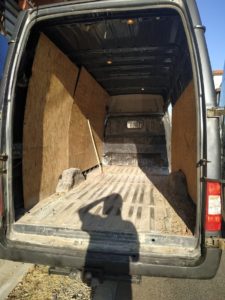 Back and side views of Rusty

She’s the tallest model, being 4m deep. And she was dirty as hell. I had to ask the cleaners to power wash her inside as well as her outside.

Her main battery was dead, so we had to replace that. Fortunately it has 2 battery system, with the second battery being connected only when the ignition is turned.

It took a while for her papers to come through. Meanwhile I went away to Morocco for a week, to try and reach the Toubkal peak, play with monkeys, and sleep in the sand.

28th September – The rust in Rusty

After removing the inner wooden panels, I got to work on removing all the inside rust in her. At first I tried with a wood sanding tool, and a brush head for the electric screwdriver.

Arin came over and lent me a hand with this part. However, we realized our tools weren’t the right ones for, the job, so we called it a day.

Everything went much better next week, after I bought proper protection gear, bough a proper angle grinder head and started using the mains powered electric drill. 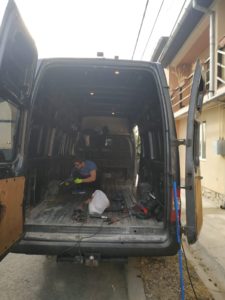 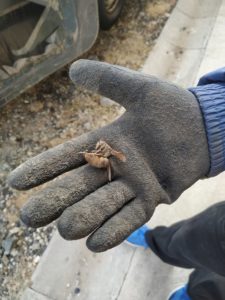 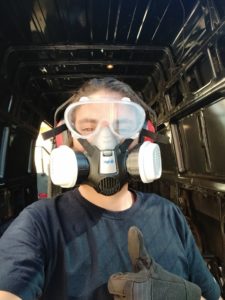 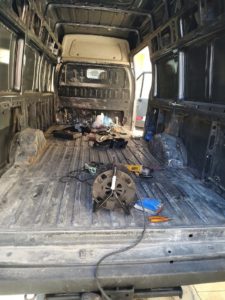 Working on the van; we also found a previous tenant, hiding away in the rear doors

It took several weeks to clean out all the rust and spray paint over it, but it was well worth it. 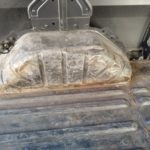 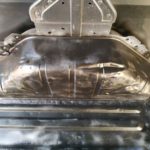 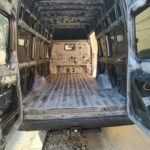 The 11th night of October was the first night I spent sleeping in Rusty. 71 days into my 23rd year, and I had made it.

A blanket made with duck feather, thick, Christmas socks Jules Verne and the sound of the street outside were my companions, as I lied down to sleep.

Since then I’ve also slept under the blanket wrapped in my sleeping bag, and bought a new sleeping bag who’s comfort temperature is -2°C.

Sometimes it’s hard falling asleep, and it is easy to waste time on the computer in the office instead of going to sleep. But it is a big transition, so no one was expecting it to be easy.

I had access to cold showers in the office building, and later, with the help of a colleague discovered hot showers, which was a definite quality of life improvement. I didn’t realize how nice it was to have hot showers always available to me before.

Having a place to sleep was nice, but I had to start taking clear, definite steps towards transforming it into a home. At first I went to work on it from Friday till Monday morning, but seeing how it affected my work performance I started working on her only on Sundays and Saturdays.

I was really lucky as the weather took my side, being sunny and general pleasant, letting me work as much as I wanted. The days were longer then; meh, winter.

I went out and bought wood, and with the help of my parents cut it down into 4.5 x ~5 cm struts, which I then used to create a skeleton for Rusty. 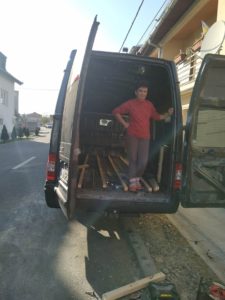 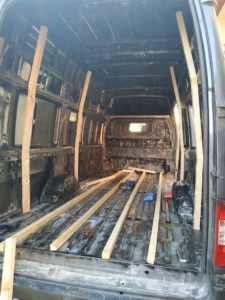 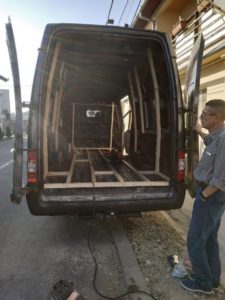 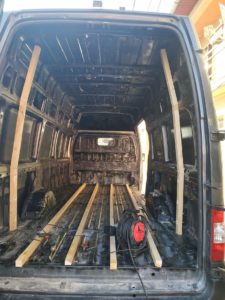 My parents and the evolving skeleton of Bessie

With the structure starting to take shape, and winter jaws closing fast, I started thinking about insulation.

At first I wanted to go with polyurethane foam. It is a good insulator, immune to moisture and easy to apply. What I really didn’t like was it’s permanence. After apply it, there is no way to get it off.

That’s when I came across this new (I think) idea of wool insulation. It is a good insulator, it can absorb and release water, preventing condensation and it is easy to install and remove. It is hard to cut though, especially if you get the thicker (>=10cm) version.

I first found a well known supplier in the states, https://havelockwool.com/. But upon talking to them I realized I needed to find someone closer to home, as shipping would be “absurdly expensive” from the States.

After looking around on the internet, I found a Romanian supplier: https://lanaterm.com/. They offer 3 types of products: 2 types of thermal insulation and 1 kind of noise insulation.

Tip: an advantage of wool thermal insulation is that it also has a high  Noise Reduction Coefficient of 0.95 – 1 (https://lanaterm.com/images/Lanaterm_Polar_english.pdf).

They were respectful and quick to respond to queries. I ended up going to their factory in Oradea as it was cheaper then having them ship it to me. 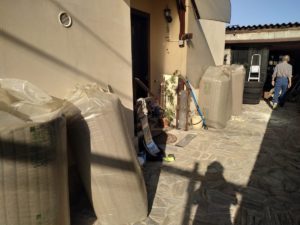 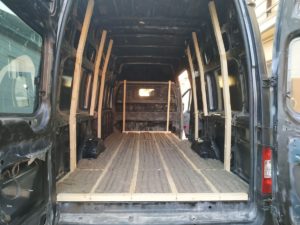 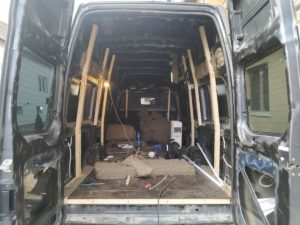 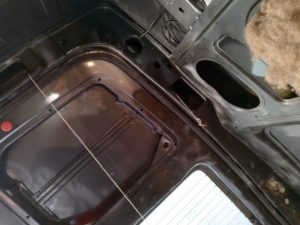 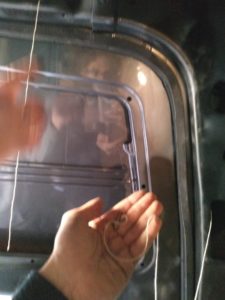 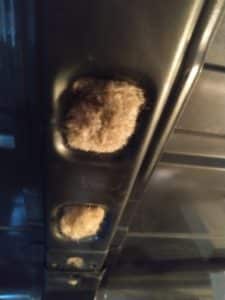 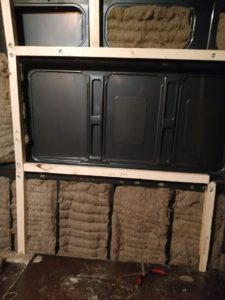 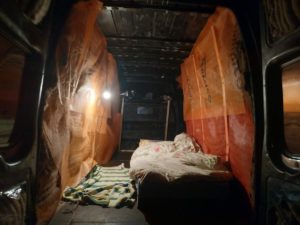 Tip: when stuffing holes, use a thread with a weight attached to it; drop it through the hole; after it comes through tie the loose end around a strand of insulation and pull it through, whilst also pushing from the other end

When I went to pick up the insulation I heard about another guy from Timisoara who was working on such a project.

Then, when I went to an LPG service to get informed I met Marius, a fellow vanner (is this a good term?). It gave me a lot of hope, and it put a smile on my face, meeting someone with whom I share this desire and goal.

Since then I’ve met online another 3 van life enthusiasts from Timisoara.

It’s nice to know there’s a (small) local community of people working on their vans.

So far this post has summed up my van life experience so far. But what does the future hold?

For the answer to this question, I turned to lots of YouTube videos of other van lifers and to https://app.sketchup.com/, a free online 3D modeling software. I measured Rusty, created a 3D model and started working on the interior. 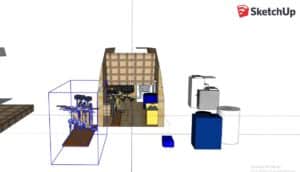 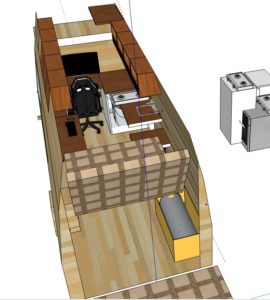 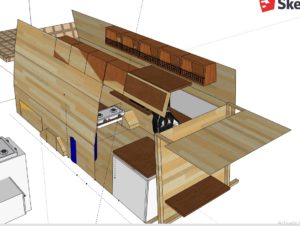 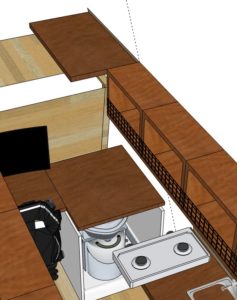 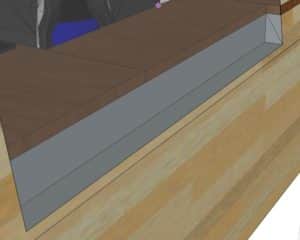 For heating I plan on using a LPG powered Propex HS2000 (https://www.propexheatsource.co.uk/heaters/hs2000) gas heater. It comes with a digital thermostat.

So far so good. I’ve slept from Monday through Friday in Rusty for 3 out of the past 5 weeks. One I’ve spend at Arin, as my flooring wasn’t ready and this one I am away for work.

She had a heating control problem, which a trusted mechanic fixed for ~50$. And now I’m looking forward to finishing up the roof insulation and installing my heater, which will make living in it a lot more comfortable.

One thing I’ve discovered during my journey into VanLife so far, is that, when it comes to building up Rusty, and traveling around in it, ” i’ve got faith of the heart. \ i’m going where my heart will take me. \ i’ve got faith to believe. \ i can do anything.” – Russel Watson- Faith of the Heart(Enterprise Theme)