Today, 22.10.2018 we decided to head out to the Retezat Mountains. We left from Lugoj at around 6AM, and it took us a couple of hours to get to Hobița. From there, a 20 km forest road to the Retezat National Park helped us gain a couple hundred meters in altitude. At its end we were already at 1700m. Although 20km doesn’t sound like much, despite mine and Bessie’s best efforts, it took us 2 hours to reach the top. 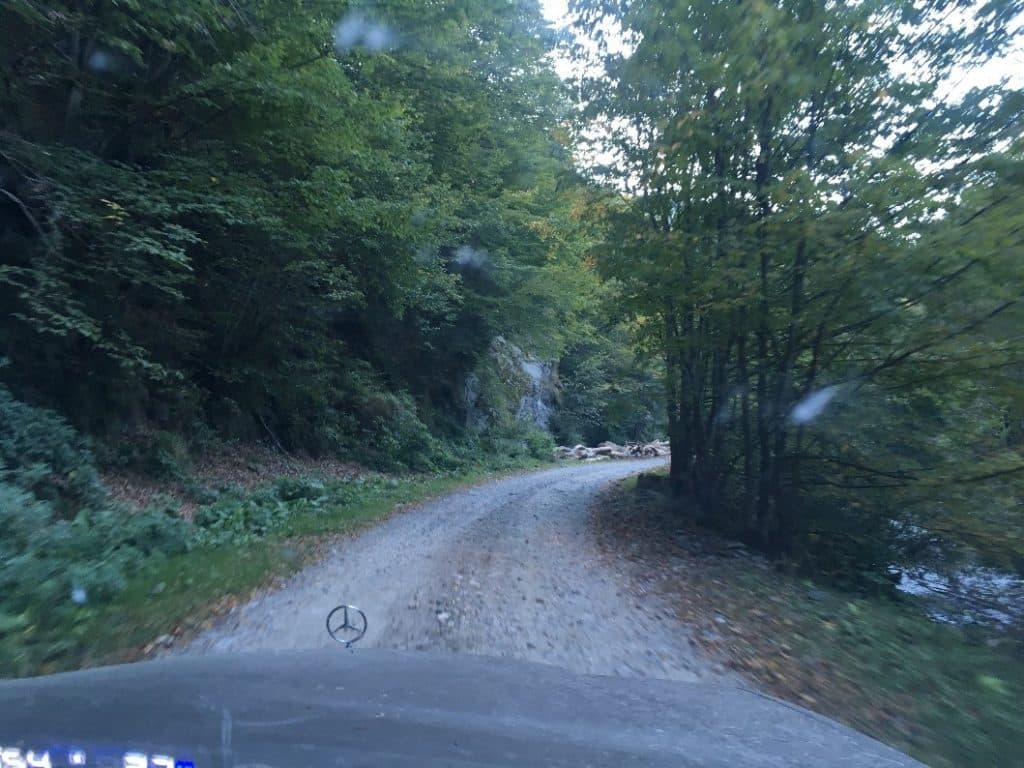 Bessie is a ’91 W124 Mercedes, which means it is quite robust and has a good ground clearance. Even so, the forest road was not easy; but it was an interesting experience, driving for so long on an unpaved road, littered with rocks which could puncture my oil pan at any time. One of them managed to break one of the screws holding the oil pan’s shield in place.
I learnt to drive on and over the side of the road, and it kept me constantly focused: should I go left, or right? Maybe change after that rock? Should I take that one under the wheel or go around it? The road is good here, maybe I could drive a bit faster.
Getting back down was easier. I didn’t have to use the clutch nearly as much, and I didn’t kill the engine (it died once while I was driving down 🙁 ).

Once we reached the end of the road, we got off and looked around. The mountains, as always, were breathtaking. Here are some nearby peaks. We didn’t visit any of those, as we headed straight for Saua Custurii.

Initially we had planned for a longer hike, but me and Mișu had some pain in our knees from the last hike, so we decided to go for a shorter walk, following the blue triangle trail to Saua Custurii . We still got to climb one peak though!

The first part of the climb was done over some apparent hills. We were guided by the poles outlining the winter trek, and sometimes by the path made by other hikers.

It was quite beautiful, on our way we passed a sheepfold and a small river. The path across it was made from slabs of rock. The water was ice cold, and crystal clear. 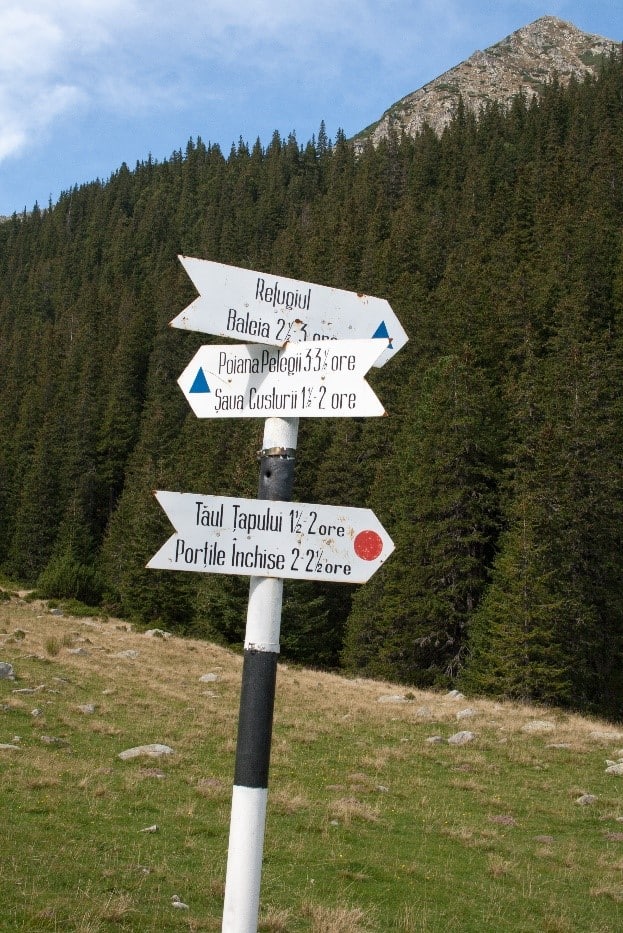 After we crossed the river, and climbed a few meters, we got a good look at the waterfall from where it stemmed. It came rushing down, swerving left and right.

The rest of the first climb was uneventful. Despite my knees, I pulled ahead for a bit with Arin and Darius. We decided we’d take a brake at what seemed to be the top of the climb (of course it was not).

Down below, Mișu was applying some calming lotion to his knee. I tried some when we reached the peak. It made my knees feel hot, and the effect was only intensified when I put on my elastic bandage and my soft kneepad. 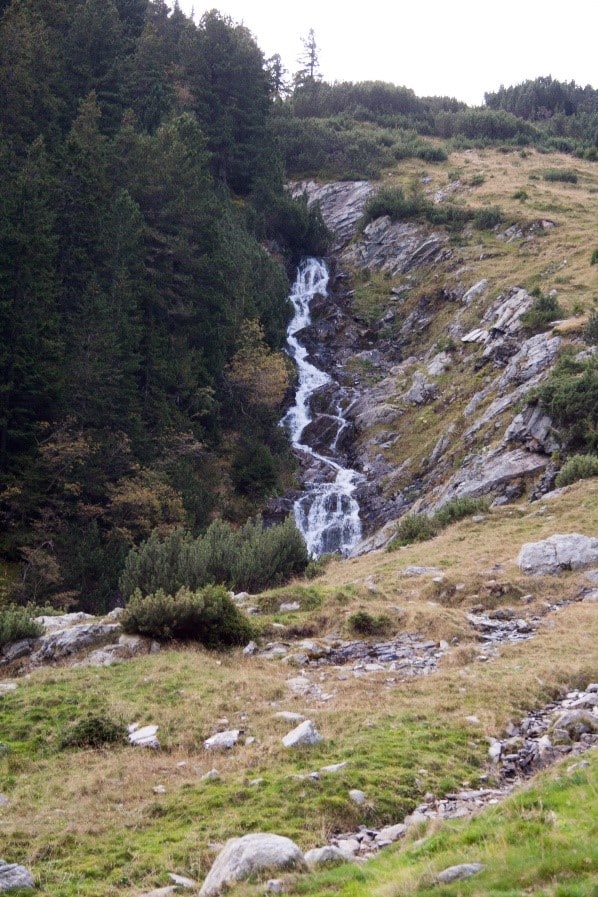 I guess the first hour or so of any hike can be the hardest to overcome. It takes your body a while to shift gears, to get accustomed to the effort and to realize ‘hey, it’ll take a few hours for us to get back, and that’s ok’.

After a bit more climbing we reached a place where the grass was green. Like, Uranium green. Probably the area benefits from a lot of rain. It was nice to just take a break and lie down on the grass. 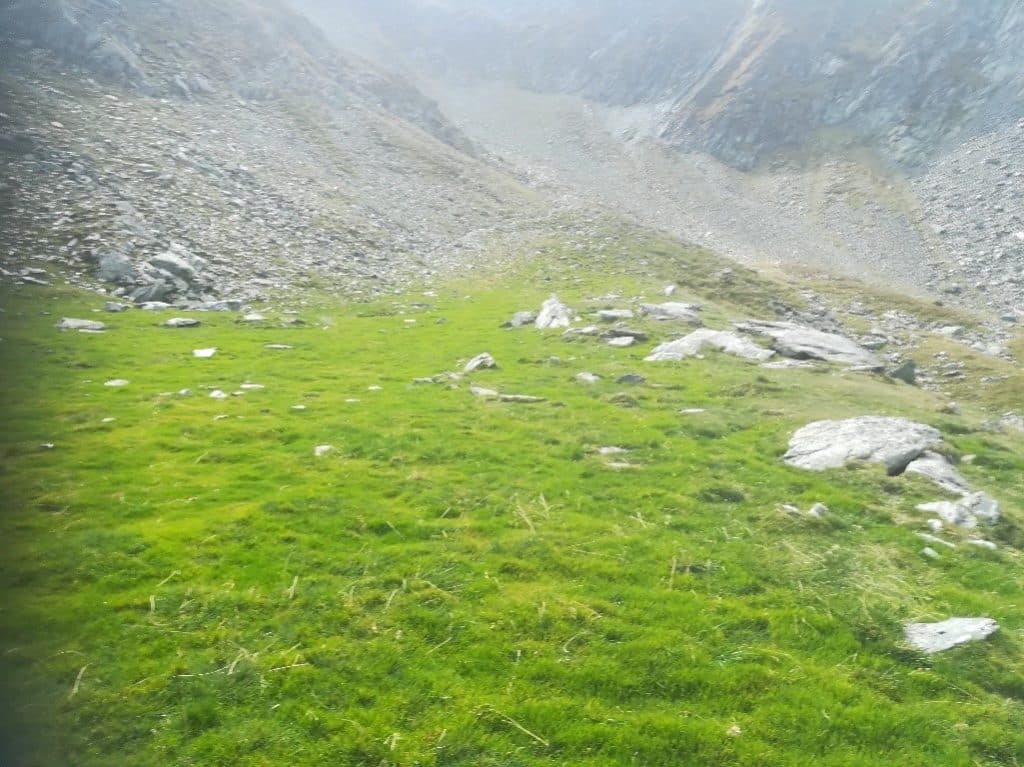 Once we reached Saua Custurii we took a break, and I headed for a rock outcropping. It was, really something. I could hear insect buzzing around me. I saw this crazy fast butterfly racing by. I’ve never seen one go so fast in my entire life.

Nearby was a small cairn. Build by other hikers, it didn’t mark a trail, or a river, just an interesting spot. It was nowhere near as large as those on the trail, and much smaller than the one at the peak. But it was nice in its own way. 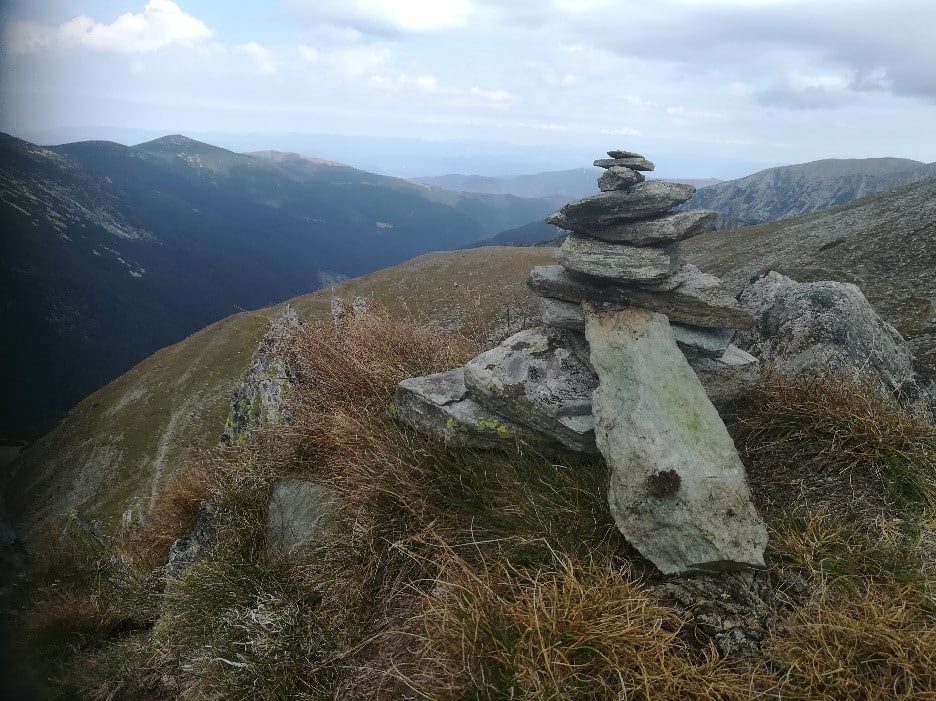 By this point my knees started to get sore, but it wasn’t much farther to the peak. The wind started to pick up, and the clouds gathered, blocking the sun. It’s amazing how fast weather can change on top of a mountain.

The final ascend was done over a rock wall. 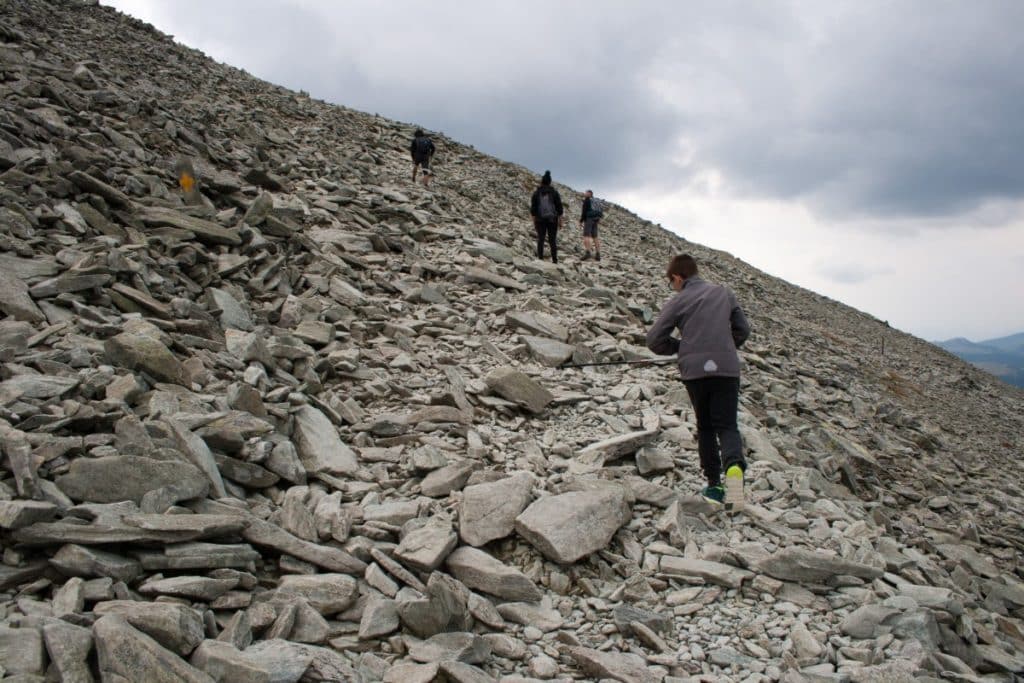 The view from the peak was beautiful, as expected, and we took a well-deserved break. I applied some more lotion to my knees, and we soon enough we started down the mountain.

On the way down, Arin and Darius took a different route and that gave us quite a scare.

Going down was rough on my knees, but bit by bit we made it. Then came the 20km drive back to asphalt, followed by a good meal at a restaurant, and the rest of the way home. Another good trek!<div id=”map_ol3js_1” class=”map undefined” data-map_name=”undefined” data-map=”map_ol3js_1” style=”width:100%; height:500px; overflow:hidden;border:2px solid grey;” >